With the Rolex Fastnet Race having so many boats, so many classes and a 96-year history, it is inevitable that many past winners, be they of line honours, individual classes or of the main IRC overall prize, the Fastnet Challenge Trophy, should be among the record 400+ strong entry in the Royal Ocean Racing Club’s flagship event in 2021.

In fact among the overall winners, 2017’s victor Didier Gaudoux, with his trusty JND39 Lann Ael 2, is at present the only one returning with the same boat and a similar crew. On board again will be family members, including his daughter Coralie and possibly son Thomas, as well as veteran Figaro ace Fred Duthil. Lann Ael 2 hasn’t changed apart from a new paint job.

Of course the big unknown at present is the same for everyone, warns Gaudoux: “It will be a very special campaign because we don’t know when we can start to sail and we don’t know what our preparation for the campaign will be. I intend to do a few RORC races if it is possible.”

In 2020 Lann Ael 2 competed in just a few races but made the most of them, winning the IRC class in the Drheam Cup, ahead of Eric Fries' JPK 11.80 Fastwave 6 and Laurent Charmy's J/111 SL Energies, both of whom are also due on the start line off Cowes in August. That event also provided good preparation, starting from Cherbourg where this year’s Rolex Fastnet Race will finish for the first time.

“It will be a new challenge tactically between the Scilly Islands and Cherbourg with the tide,” continues Gaudoux. While his boat is based in southern Brittany, his crew, and especially Duthil, know the complex waters around Cherbourg well. The city is planning for the arrival to include COVID restrictions for the many visitors from the local region. “A lot of people will be coming and the harbour is very close to the downtown so it will be a special welcome.”

While he is not competing on his JPK 10.80, the 2015 overall winner Géry Trentesaux is returning aboard Antoine Carpentier’s latest generation Mach 40.4 Class40 Courrier Redman which finished runner-up in this year’s RORC Transatlantic Race. Alexis Loisin, who became the race’s first doublehanded overall winner with his father Pascal in 2013 aboard their JPK 10.10 Night And Day, is back to defend his title in the IRC Two Handed class on board the JPK 10.30 Léon with Jean Pierre Kelbert, proprietor of the successful French Chantier JPK. Loisin has won IRC Two Handed in three of the last four races and only was displaced into second in 2015 by Kelvin Rawlings and Stuart Childerley on  their J/105 Jester, who that year were fourth overall under IRC and top British finishers. Rawlings and Childerley are back to try their hand again, this time with their newly acquired Sun Fast 3300 Aries. 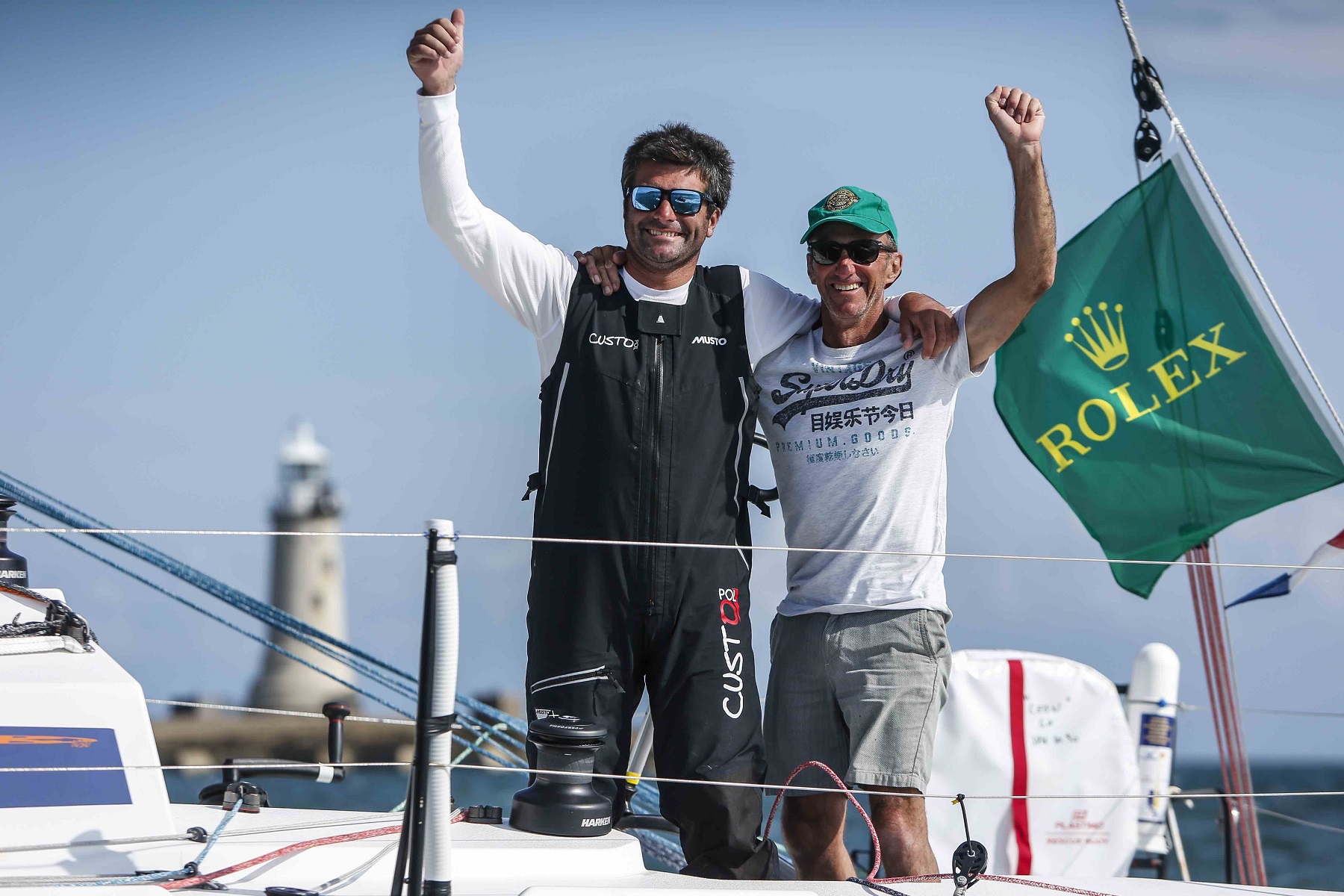 “We look forward to the new Fastnet course - it will be a hard fought contest all the way to the finish line,” says Childerley. The big draw is both the heightened competition in IRC Two Handed, with all of the podium finishers from the last two races returning, including the Sun Fast 3300 Fastrak XII, sailed by Henry Bomby and Hannah Diamond two years ago, and Louis-Marie Dussere’s JPK 10.80 Raging-bee², second and third respectively in 2019. This is bolstered by Two Handed racing being on the Olympic roster for Paris 2024. “Doublehanded sailing continues to inspire and provide a challenge that is complimented by the Rolex Fastnet Race,” concludes Childerley.

Many class winners are returning. Among the most successful is the La Trinité-sur-Mer old guard on boat builder Nicolas Groleau’s Mach 45 Bretagne Telecom, one of several Sam Manuard designs his company JPS Production builds. Bretagne Telecom is one of 13 boats entered this year to have competed in the last six consecutive Rolex Fastnet Races, but she is by far the most successful. 2019 was the canting keel speedster’s most successful year, finishing second to winner Wizard, both overall and under IRC Zero. Previously she has twice won her class and podiumed on all but one occasion. 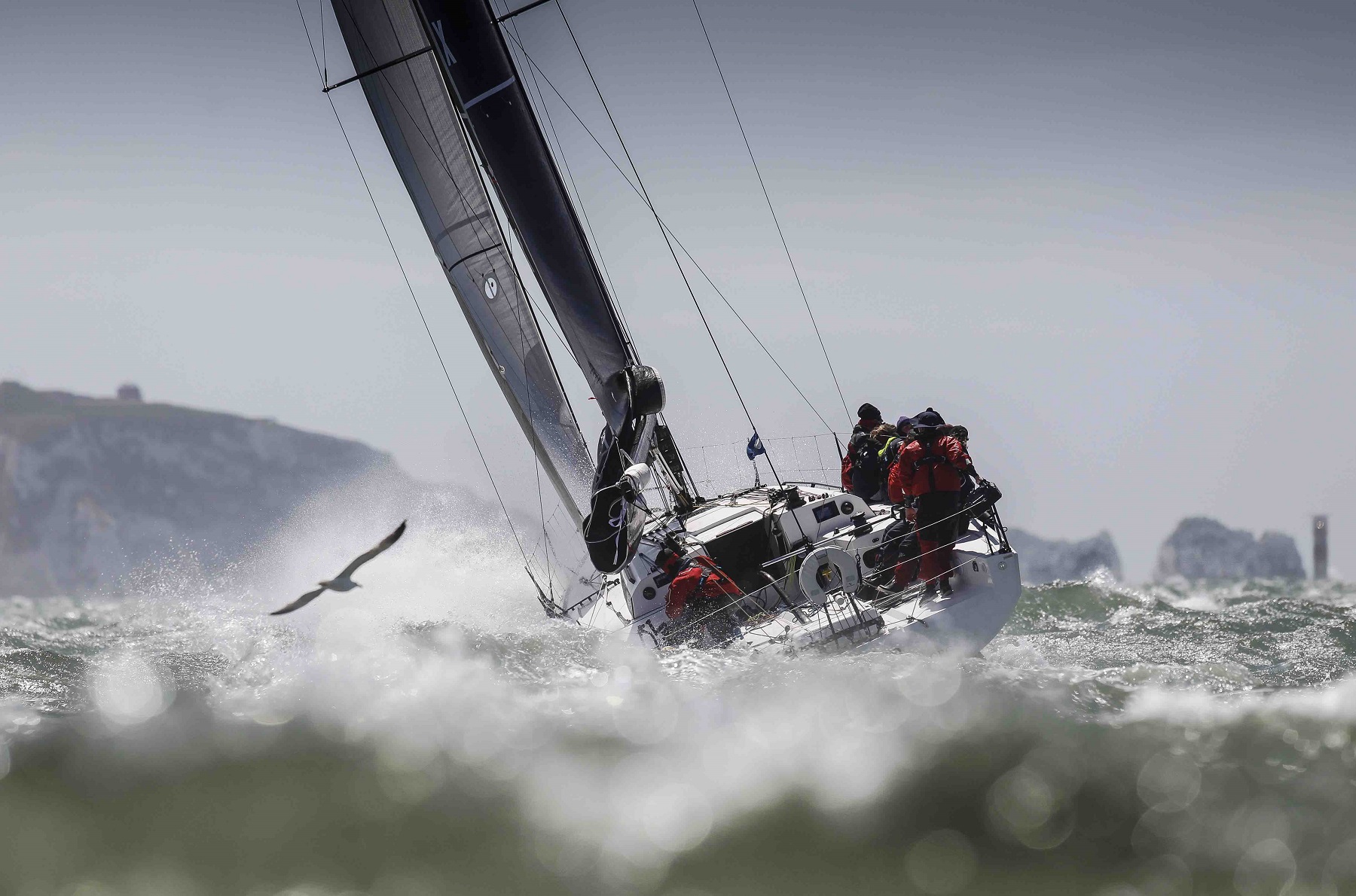 Jacques Pelletier’s Milon 41 L'Ange De Milon, which beat Lann Ael 2 into second place in IRC One two years ago, is back. While Trentesaux is not returning to defend his IRC Two title, Francois Lognone’s MC34 Nutmeg Solidaire En Peloton and Tom Kneen’s JPK 11.80 Sunrise, the other 2019 podium placers, will be. Nutmeg has a strong track record having won IRC Two in 2015 when she was fifth overall, while Lognone was eighth overall and third in IRC Two aboard his previous J/122 Nutmeg IV in 2011. 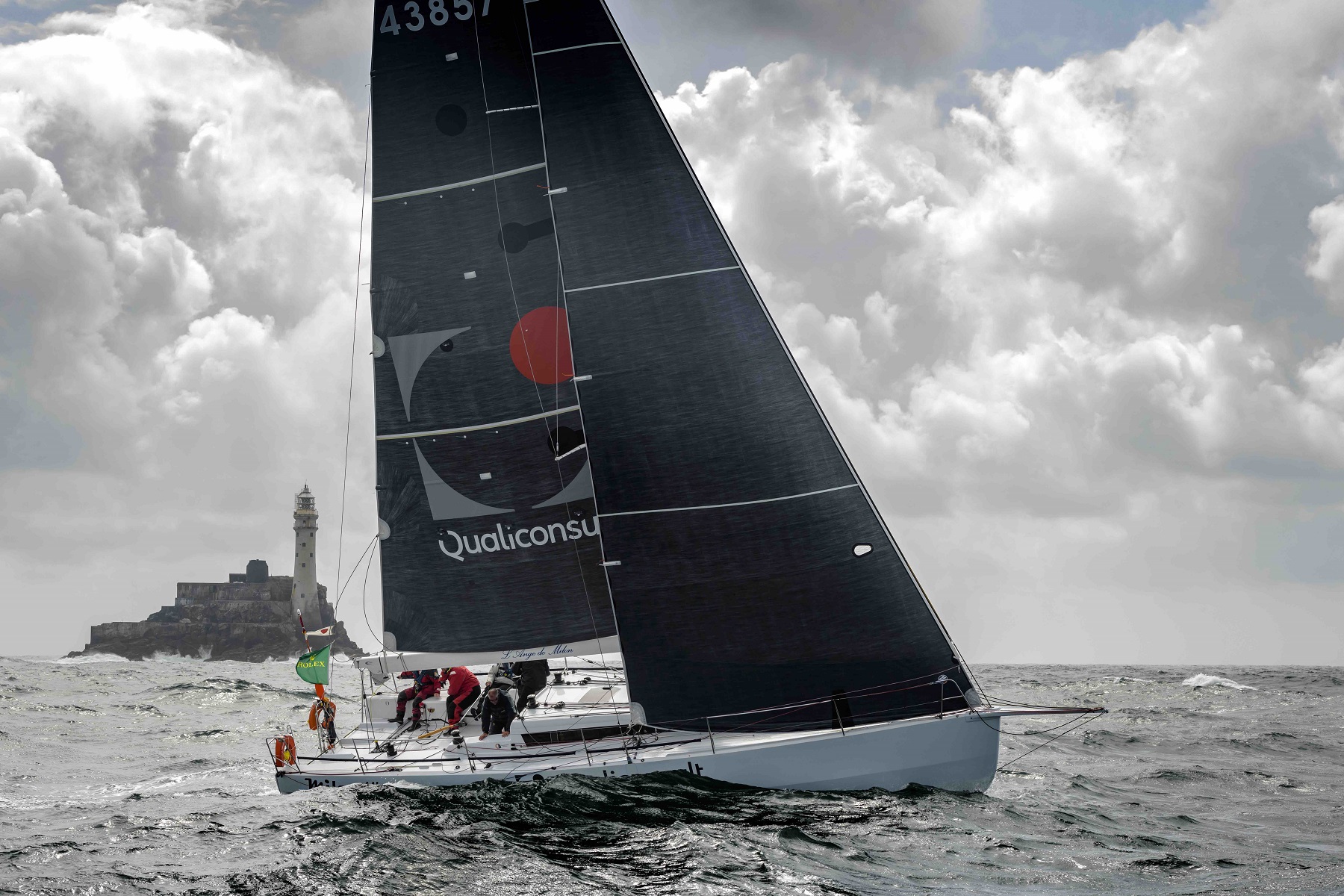 Arnaud Delamare and Eric Mordret who finished on the IRC Three podium in the last three editions, winning in 2017 aboard their JPK 10.80 Dream Pearls, will be sailing on Christian Maby’s Sun Fast 3300, Spoutnik. At the time of writing one of the  most successful sailors in IRC Four, Noel Racine and his JPK 10.10 Foggy Dew was not returning to defend his title. Racine, a retired Le Havre pilot, has won his class in three of the last five races and podiumed in all. However the remaining IRC Four podium placers from 2019 are back in Emmanuel Pinteaux’s sistership Gioia and Francois Charles’s Dehler 33, Sun Hill 3.

The non-IRC classes had a later deadline to enter than the IRC fleet but already Anglo-Frenchman Luke Berry was signed up to defend his Class40 title aboard the Mach 40.3 Lamotte - Module Création. At the time of writing, 31 Class40s were already entered, including Morgane Ursault-Poupon (daughter of Vendee Globe sailor, Solitaire du Figaro and Route du Rhum winner Philippe Poupon) on board UP Sailing, formerly Tanguy de Lamotte’s Class40 winner in both 2009 and 2011. Tales II, which won in 2015 and was second in 2013 in the hands of Gonzalo Botin, also returns but under new Italian skipper Andrea Fornaro.

While this sounds like yet another dominant French entry there are some potent campaigns from the UK. In addition to those already mentioned is the top British boat from 2019, David Collins’ Botin IRC 52 Tala (ex-Spookie), having finished third both overall and in IRC Zero. Never to be discounted is Ross Applebey’s Scarlet Oyster which was third in IRC Two in 2013 and won her class in 2007. Other potent doublehanders include Rob Craigie and Deb Fish on board the Sun Fast 3600 Bellino, which finished third in both IRC Three and Two Handed in 2017. 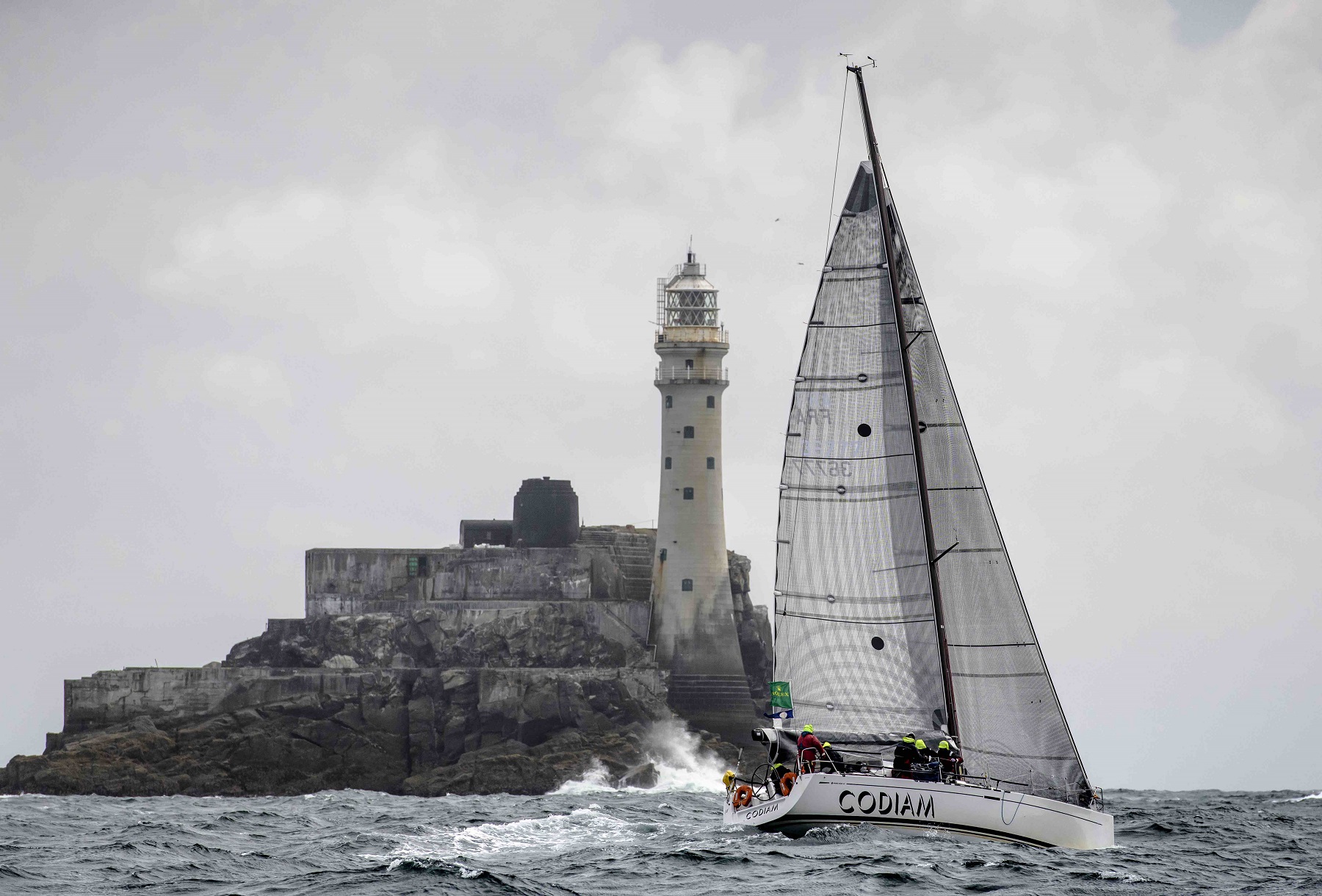 Many winners from long ago are also returning. Another team to have competed in the last six races is Nicolas Loday and Jean Claude Nicoleau’s Grand Soleil 43 Codiam. Their track record is strong including IRC One victories in 2009 and 2011 and overall finishes of tenth and seventh in 2017 and 2011 respectively. Also likely to be strong will be Gilles Fournier and Corinne Migraine’s J/133 Pintia, which won IRC Two and was fourth overall in 2017, while American Ron O’Hanley’s Cookson 50 Privateer is due a top result having finished eighth overall in 2019, second in 2017 when she won IRC Zero and a second place in IRC Canting Keel in 2015.

A number of yachts and crews are returning who did well in earlier editions of the Rolex Fastnet Race, especially, for some reason, from 2005. Jonty and Vicki Layfield, who sailed their Swan 47 Sleeper to seventh overall then, will be racing their Swan 48 Sleeper X. Similarly Ed Broadway, who was third in IRM that year on his Hooligan V (and again in 2007 on Hooligan VI) is back sailing doublehanded on his Sun Fast 3300 Hooligan VIII. Beating Sleeper 16 years ago, in fourth and sixth overall were Xara, Jonathan Rolls Swan 38 and Harry J. Heijst’s S&S41 Winsome, both of which are entered again. Thunder 2, Robert Boulter’s Mills 37 IRC 0 winner that year, returns but now in the hands of Vladimir Phillips, while Guy Sallenave’s X-442 Ster Wenn 5, which was second in IRC One is this year being campaigned by his son Pierre. 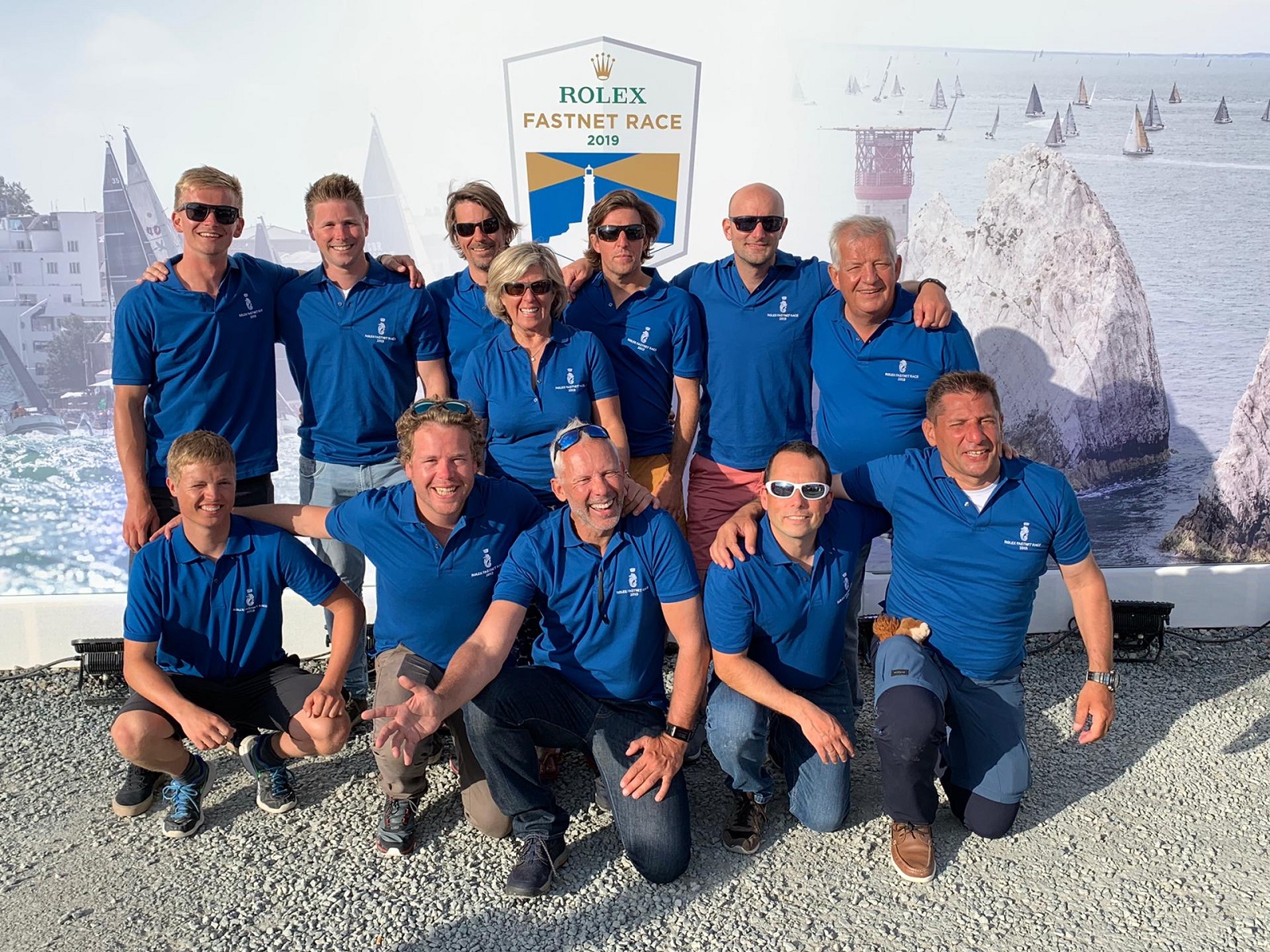 The Goubau family from Belgium taking part in their 7th consecutive Rolex Fastnet Race on their First 47.7 Moana © Paul Wyeth/RORC

No Rolex Fastnet Race is complete without the Goubau family from Belgium taking part aboard their faithful First 47.7 Moana. They have competed in the last six editions and finished third in class in 2005, 2011 and 2013. Longue Pierre, David Cooper and Paul England’s Dehler 38 is back too, having the same participation record, her best result coming in 2005 when she was ninth overall.

Further back, Vendée Globe skipper Conrad Humphreys has teamed up with another solo offshore racer and former Team Philips crewman Alex Bennett on board the latter’s Swan 46, Ginny B. Humphreys won the 1991 Fastnet Race overall with a young Matt Humphries aboard the David Thomas-designed half tonner Min-O-Din. Returning from the 2001 race are Cracklin’ Rosie, ninth overall and third in IRC Zero in the hands of original owner Roy Dickson and now being campaigned by former RORC Commodore Steven Anderson and RORC Treasurer Derek Shakespeare. Present Commodore James Neville is entered aboard his HH42 Ino XXX having finished six overall and third in IRC One in 2017 and RORC Vice Commodore Eric de Turkheim is back with his lighter and faster NMYD 54 Teasing Machine which finished seventh in IRC Zero and eleventh overall in 2019

Given this vast experience due on the start line, we can look forward to one of the most competitive Rolex Fastnet Races on record.